Feasibility of recharging aquifer through rainwater in Patan, Central Nepal

Water is a basic need of lives. Like other aggressively growing town of developing Asian countries, Patan in Lalitpur district of Nepal is also facing water scarcity problem. Since so many people of Patan depend upon groundwater, extraction rate of groundwater in this area is perhaps higher compared to recharge and hence, water table is declining. Urbanization is focused in the central part of Patan on the gravel deposit (Chapagaon Formation) which is the main recharge zone of groundwater, therefore recharge of groundwater could not take place naturally. Encroachment of ponds which were helping to groundwater recharge is also a reason for declining the water table. This study deals with infiltration rates recorded from six different localities of Patan using a single ring percolimeter. The results show that the infiltration rates are higher (10.5 x 10-5 m/s) at core areas of Patan (Guita aquifer, Khwayebahi aquifer and Emu Dva aquifer) compared to the peripheral areas (1.5 x 10-5 m/s) such as Naricha and Nayekyo aquifers. The infiltration rate increases remarkably during dry winter and pre-monsoon periods at the core area of Patan. Infiltration rate decreases during summer and early winter periods. The infiltration rates correlate well with subsurface lithology, i.e., the rates are higher at gravel and lower at clayey sediment (Kalimati Clay). The Patan area is underlain by gravel and sand of the Chapagaon Formation which inturn is underlain by thick clay of the Kalimati Formation. The zone above the clay is the shallow aquifer zone and the zone below the clays is the deep aquifer zone. There are 39 ponds and more than 218 shallow dug wells which may be utilised for recharging shallow aquifers through rainwaters. Most of the ponds and shallow dug wells which lie on the Chapagaon Formation are suitable for recharge purpose due to good infiltration rate in the formation. Historical stone spouts can also be utilized as a recharge medium. Adequate rainfall, good infiltration rate, and distribution of many recharge media allow aquifer recharge in Patan through rainwater. 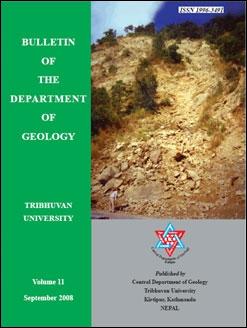