Othello is honest. He wants to establish an order and peace in the society. He falls in love with a white lady, Desdemona. Despite the discontentment of Desdemona’s father Brobantio, they marry each other. Iago, an evil-minded man, is not happy with the promotion of Cassio, a junior officer to Iago, to lieutenant’s post in support of the chief Othello. Iago becomes jealous to Cassio and plans to destroy the relation between Othello and Cassio in any way it is possible. He uses Roderigo, a rejected suitor to Desdemona and Emilia, the innocent wife of Iago in his evil plot. Iago treacherously makes Desdemona’s handkerchief, a marriage gift from Othello, reach in Cassio through Emilia. Then he notices Othello about the Apresence of the handkerchief in Cassio as an accusation of Desdemona’s falling in love with Cassio. In reality, both Cassio and Desdemona are innocent. They are honest and loyal to their moral position. But because of jealousy grown in Othello by Iago, Othello plans to murder his kind and truly loving wife and his dutiful junior officer Cassio. Othello kills Desdemona and Iago kills his wife Emilia as she discloses the reality about Iago’s evilness. Othello kills himself after he knows about Iago’s treachery. As a result, all the happiness, peace and love in the families of Othello and Iago get spoilt completely because of just jealousy upon each other.

Ram Prasad Rai received his Bachelor’s degree from Ratna Rajya Laxmi Campus in Kathmandu and completed his Master’s degree in English literature in 1997 from the University Campus, Tribhuvan University, Kirtipur. He took his M. Phil. degree from the Institute of Advanced Communication, Education, and Research (IACER) in Kathmandu under the Pokhara University in 2015. Currently, he is working as a Teaching Assistant at Ratna Rajya Laxmi Campus, Tribhuvan University in Kathmandu since 1999. He teaches English language and literature there. He has also taught English language and literature at KIST College and Prasadi Academy for six and nine years respectively. 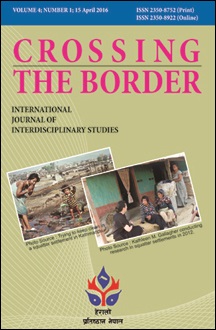