Present study was conducted in the Suklaphanta Wildlife Reserve, Kanchanpur district, far western Nepal during June-July, 2005. A total of 150 quadrats (1m x 1m) were sampled in three differentially treated sites (unburned, early burned and late burned). Plant community composition and above ground biomass at different sites were quantified. The relationship between species richness and biomass was detected in the Imperata-Saccharum grassland. Altogether 100 plant species were recorded in the grassland. The highest number of species (62) was recorded in early burned site, whereas lowest (54) species were recorded from unburned site. Among all species recorded, 23 were common to all sites. The highest species richness (13 species/m²) was recorded in the early burned plot. The above ground biomass was highest (583.93 g/m²) in unburned plot. Mean above ground biomass of all the three sites of the grassland was 249.72 g/m². These results indicate that the burning has significant impact on both species richness and biomass. Maximum species richness was found in the biomass interval between ca. 100-300 g/m² when all the sites were combined. A hump shaped pattern was observed in the grassland when all the data were combined. 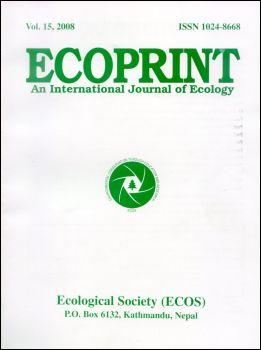