In 2015, two massive earthquakes occurred in the central region of Nepal, killing more than 8000 people. The disaster destroyed many houses and public infrastructures and severely affected 14 districts in the central region of Nepal. Most of the affected people were disconnected from basic services such as safe drinking water. Being a basic human need, essential to live a healthy life, drinking water scheme rehabilitation project was initiated by many non-governmental agencies in coordination with the Government of Nepal (GoN). However, due to the limitation of the funds and time, most of the implementing agencies faced problems to prioritize schemes and the communities, which at first needed to focus to reinstate. Therefore, a vulnerable ranking method was adopted to distinguish the priorities to reconstruct damaged and totally destroyed water schemes in Dhading, Gorkha, Nuwakot, and Rasuwa districts of Nepal, which are the districts in the most earthquake affected region. In the process of vulnerability ranking, three major community level parameters and indicators were considered for the ranking. 1) Number of households without safe drinking water after an earthquake, 2) Number of households without improved sanitation after an earthquake, and 3) Disadvantage Group (DAG) ranking of the Village Development Committees (VDCs) of the districts. This process of ranking using community level parameters technique is able to substantiate a justice scientifically in front of the communities, government, donor, and other stakeholders in the selection of VDCs to rehabilitate the drinking water schemes. 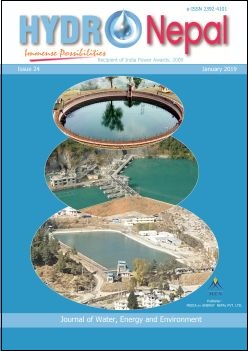 The copyright of the articles and papers published is held by HYDRO Nepal Journal.

The views and interpretation in this journal are those of author(s), and HYDRO Nepal does not bear any responsibility for the views expressed by authors in the journal.