The rhizobacteria were isolated from rhizosphere of rice plant of different fields of 4 districts of Nepal and 5 districts of Bihar and Uttar Pradesh, adjoining states of India with Nepal. The DGGE analysis was performed for diversity analysis. For the construction of dendrogram, 16S rRNA gene was amplified by two different sets of primers. The DGGE ladder consisting of PCR amplified products of nine pure bacterial cultures were obtained. The first DGGE ladder was prepared by 400 bp fragment of 16S rDNA with GC clamp and the second DGGE ladder was prepared with 200 bp fragment of 16S rDNA with GC clamp. The perpendicular DGGE of these amplicons based on their melting behavior clearly demonstrated separation of different isolates. The 16S rDNA fragment amplified with primer set of V2-V3 regions with GC clamp showed separation between 40-60% of denaturant. The DGGE profile based on primer set F352T and 519r for various bacteria present in soil samples of 5 districts of India and 4 districts of Nepal revealed that the number of bands which might be specific for diazotrophic isolates varied from 2 to 11. The dendrogram constructed based on DGGE profile of various samples of 5 districts of India and 4 districts of Nepal showed that all the samples could be clustered in nine groups with 58-96% similarity to each other. Among all these 37 samples, only Var-4 and Var-5 showed 100% similarity, no other samples from any site showed 100% similarity. 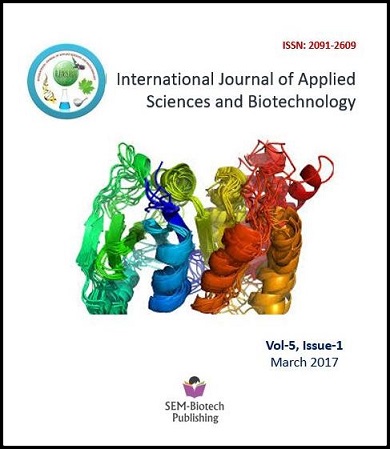