This research entitled, “Prospects of Promoting NTFPs for Livelihood Improvement” was carried out in Habeli Community Forest of Nuwakot district with the specific objectives of assessing the status of NTFPs in the study area, studying the local people’s knowledge about NTFPs, their attitude towards collection and domestication, assessing the role of NTFPs to household economy and existing market system of NTFPs. Altogether 30 households were sampled to carry out the research and the information regarding biophysical and socio economic condition, perception towards NTFPs and their domestication were collected through various PRA and RRA tools like Household Survey, Group Discussion, and Key Informant Survey (KIS). People were generally familiar with the NTFPs and their importance and were slowly heading towards NTFPs domestication although on a small scale. The respondents have been utilizing their agricultural land to grow NTFPs like Asparagus racemosus, Emblica officinalis and other species like Dendrocalamus strictus and Arundinaria intermedia that were grown naturally on the farmlands and were also willing to domesticate more NTFPs having higher market value such as Swertiachirayita in the upcoming days. Altogether of 34 NTFPs of 28 different families were documented in the study area where most of them were in their wild stage. The C.F has the immense opportunity of promoting NTFPs in future which is at the rapid conservation stage right now. The geographical and climatic conditions are also favorable to grow NTFPs that may lead towards the initiation of forest based small scale enterprise that can eventually generate employment and income. NTFPs promotion has become essential in all parts of the country so research on this subject matter can create a milestone in the economic upliftment of the country. The future research on promotion of NTFPs, local manufacturing of NTFPs, distribution ecology and reproductive biology of NTFPS also has the great potentiality. 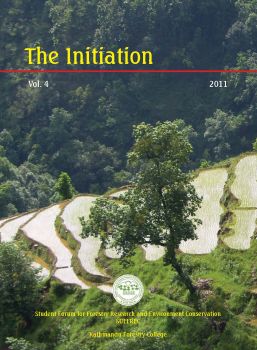