Cannabis, Lord Shiva and Holy Men: Cannabis Use Among Sadhus in Nepal

Background:  Despite being illegal in Nepal, cannabis grows wild, is cultivated, readily available and often consumed during religious festivals, such as those in honour of the Hindu god Shiva. Holy men (sadhus) also consume cannabis to aid meditation, and many are believed to suggest that as a substance favoured by Lord Shiva, and, as such, should be used. However, there are concerns that all cannabis use in Nepal is not benign, and that there are negative health and social consequences from its use for some consumers.

Objectives: This study sought the views of sadhus in Nepal.

Method: During the major Shiva festival at Pashupathinath temple complex in Kathmandu, Nepal, 200 sadhus were surveyed.

Results: Most used cannabis daily, a quarter believed cannabis and its use to be legal in Nepal, and a further ten percent were unsure, about one third believed cannabis should be used by Hindus, but only fourteen believed Lord Shiva promoted its use. Those less educated and from the Naga sect were more likely to hold such views, and provide cannabis to devotees.

Conclusions: Sadhus with evidence-based information about cannabis and its potential harms can play an important role in assisting to reduce harm and facilitate engagement in treatment. 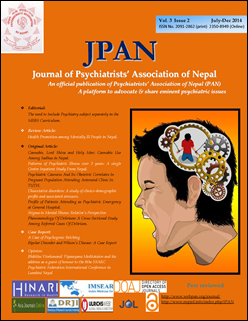