Introduction: Obsessive compulsive disorder (OCD) is among the most prevalent and debilitating mental illnesses. Associated physical and psychiatric comorbidities furthur complicate its outlook. The present study was conducted to sort out psychiatric and major physical comorbidities among Nepalese OCD patients presenting to a psychiatric out-patient service.

Material And Method: We used the ‘ICD-10: Classification of Mental and Behavioral Disorders’ for diagnosis and the ‘Yale Brown Obsessive Compulsive Scale’ (YBOC) for rating OCD symptoms. Psychiatric comorbidity diagnoses were made as per the ICD-10 and physical diagnoses according to the departments from or to where subjects were referred.

Results: Of total, 45 (60%) were male. The most commonly affected age groups were 20-29 (39%) and 30-39 (32%). More than half subjects presented after more than five years of illness. Thirteen percent subjects had suicidal intents. Nearly two third subjects had presented with the YBOC score of severe range. Forty percent subjects reported past history and 55% family history of significant illness. One fourth revealed substance use and assessment indicated premorbid cluster C traits/ problems among nearly 45%. Ninteen percent had physical and 63% comorbid psychiatric disorders. Mood, mainly depressive and other anxiety disorders were the most common ones.

Conclusion: Many of Nepalese OCD patients present late to psychiatric service when they are severely affected and have other comorbidities. Depressive and other anxiety disorders are the most common psychiatric comorbidities. 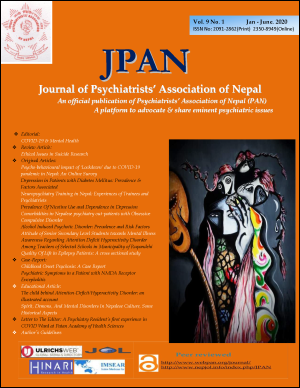