After the unification of many tiny states into a single and unified state, the foundation of Nepalese foreign policy was coined by brave, visionary and nationalist king Prithivi Narayan Shah. On the basis of geo-reality, his foreign policy based on non-alignment and neutrality is still relevant. But the subsequent rulers could not maintain their foreign policy images. The trend of changing foreign policy tilt with every change in regime in general and leader in particular created difficulty in foreign policy making. The geo-strategic location of the country on the one hand and continuous political instability in the country on the other always created threat for its survival. The geographical proximity of two Asian powers and their security concern further added more threat upon our independence. All these conditions have played influencing role in the determination of foreign policy choices. Since, Nepal is in advantageous position to benefit from India and China, after a long transition, the newly elected government has almost single choice to act as a balance of local, regional and global interest. So the main objective of this article is to analyze the patterns and trends of Nepalese foreign policy choices. Secondary sources of data are used to achieve the objectives. 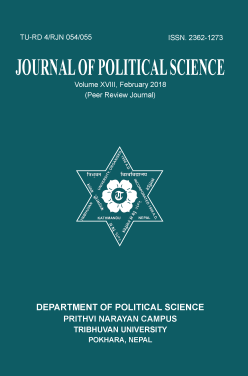