Prevalence of and associated risk factors for pterygium in the high altitude communities of Upper Mustang, Nepal

Objective: To determine the prevalenceof and associated risk factors for pterygiumin the high altitude communities of the Upper Mustang region of Nepal, near the Tibet border.

Materials and methods: Six villages of the Upper Mustang were selected based on the concentration of population. All subjects were permanent residents aged 16 years and older, and recruited through a household census with mobilization of local monks who had been trained as interviewers, and people were invited to attend the eye clinic for a complete examination. A cross-sectional studywas conducted which included the parameters oflaterality, severity, occupation, age, sex and altitude of residence.

Conclusion: Pterygiumisa significant public health problem in the high altitude communities of Nepal. It is more prevalent amongst the farmers than in the other professionals. 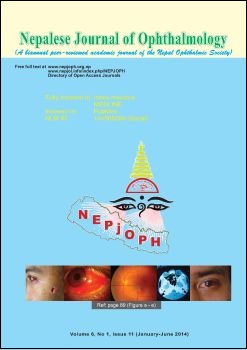