Neurobehavioral Changes: An under looked aspect of Head Injury

Background: Different types of behavioral changes are seen in head injury patients, and these changes are directly or indirectly related to daily activities. Major alterations of personality after head injury are generally seen in the patients with severe head injury. However, disturbing post-concussional symptoms like headache, dizziness and memory problems generally persists for few months even in the less severely injured ones.

Study design: Prospective analytical study. Sampling technique: Non - probability consecutive sampling. Site of study: National Institute of Neurological and Allied Sciences, Bansbari, Nepal. Inclusion Criteria: All head injured patients above the age of 16 years. Exclusion Criteria: Extended Glasgow Outcome Scale of less than 3 at 6 months follow up. Data Collection and Analysis: All patients above the age of 16 years with head injury who got admitted were enrolled in the study. Parameters like age, gender, mode of injury, GCS at presentation were recorded. Extended Glasgow Outcome Scale along with Neurobehavioral rating was evaluated at 6 months. Then neurobehavioral rating scale was obtained by direct interview. Data analysis was done using SPSS v.20.

Results: Total number patients were 76 among which 71% were below 40 years of age and majorities (87%) were males. Neurobehavioral categories like abnormal intentional behavior, lowered emotional state, heightened emotional state, arousal state and language had significant association with GCS at presentation and EGOS at 6 months. Similarly, age had significant association with language, where there was absent to mild language difficulty in patients below 40 years of age. Likewise, language difficulty, lower emotional state and abnormal intentional behavior were significantly associated with gender, as it was mild to severe in 30% of the female population who had sustained head injury.

Conclusion: Several neurobehavioral characters seem to be present in the various categories of the head injured patients in different ratios. Language problems seems to be less  in the younger patients below the age of 40 years; although, few neurobehavioral parameters seems to affects the females more common compared to male counterparts. Also, family disruption and its extent of severity was significantly related to the severity of head injury. 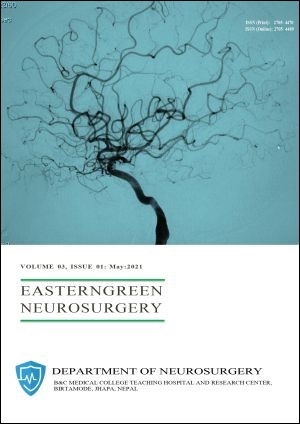