Blue bull is Asia’s largest antelope, a species of least concern in IUCN Red data list of 2020. In Nepal, it is vulnerable and is often considered as a problem animal for its crop raiding habit. Although, its population is restricted in India and Nepal, there are insufficient studies conducted on the distribution and threats of the species at local level. This study aimed to assess the distribution of blue bull and its conservation threats in Bardia National Park and its buffer zone. Field survey was carried out to identify the potential area with the information provided by park staff and buffer zone people and by the transect method in the selected habitat to determine the distribution of blue bull population. Additionally, six focus group discussions (1 in each of thefive sites and 1 with park staff) and a half-day workshop (involving 25 participants representing each site and park office) were organized to assess the existing threats to the species. Data were analyzed descriptively using MS Excel, while the distribution map was prepared using Arc GIS. Also, 8 major identified threats were ranked using relative threat ranking procedure and classified into four severity classes. We found that the population of blue bull was dispersed from core area of Bardia National Park towards the buffer zone area. Open grazing, invasive species, predation by tiger and flash flood were the major threats to the blue bull as perceived by the local people. Habitat management activities including control of grazing, removal of invasive plant species, plantation of palatable grass species, increase in other prey species of tiger and control of flood in blue bull’s habitats are recommended to protect the species and thus sustain their threatened population. 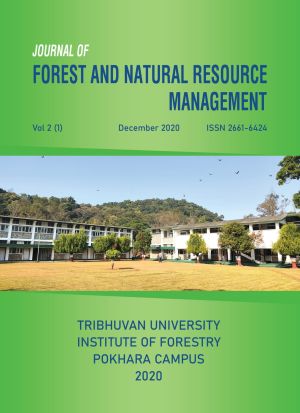