Urine Incontinence Before and After Delivery in Primipara

Introduction: Urinary incontinence is a common condition in pregnancy and postpartum period. It causes discomfort, embarrassment, loss of confidence and self esteem. This study aimed to determine the occurrence of urinary incontinence in pregnant attending antenatal clinic in a tertiary hospital.

Methods: A descriptive observational study was conducted to find out occurrence of urinary incontinence in primiparous attending department of obstetrics and gynecology from August 2014 to August 2015 at B.P. Koirala Institute of Health Sciences.

Results: The total of 100 primigravida were enrolled in the study. Out of which six had urinary incontinence with mean age of 23 years. Most of them were in the period of gestation group 38–40 weeks. 22% of total were obese with mean BMI of 26.69 kg/m2. Seventy nine patients had vaginal delivery, four had vacuum assisted vaginal delivery and 17 had cesarean section. Age and Body Mass Index (BMI) was not found to be associated with urinary incontinence. Oxford grading for assessment of perineal muscle after delivery showed decline in pelvic muscle tone which was significantly associated with urinary incontinence. However, the mode of delivery, and birth weight of baby was not found to be significant.

Conclusion: The study finding suggested that pregnancy acts a risk factor for development of UI although no preference could be drawn regarding the mode of delivery. Our study also concluded antepartum UI as a risk factor for postpartum UI. 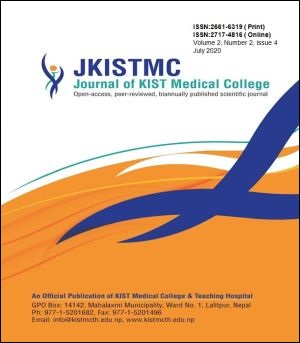