Exploring Psyche of the Gurkha Soldier in Koirala’s Soldier, Rai’s The Murderer and Bista’s The Andhikhola

Lahure, ‘Gurkha soldier’ has a unique image and personage in the World; people around the world characterise and praise the braveness and honesty of Gurkha soldiers. But no one describes and contemplates about the psyche and personality of the lahure outside the barracks and battlefields, and treat accordingly them. This research paper explored psyche, motives and mentality of lahures (“Gurkha soldiers”) in Koirala’s Soldier, Rai’s The Murderer and Bista’s The Anthi Khola. This paper exposed the pre-service, in-service and post-service conditions, thoughts and experiences of lahures, and unveils the psychological motives, intentions and personality of lahure in the stories selected. This research has exploited interpretative qualitative approach and utilised psychoanalysis theory to interpret the data from the stories; this theory exposed the mindset and mentality of a person like a lahure. Three stories of different writers are purposively selected to truly exhibit the psyche, persona and mind of lahures in the pre-service, in-service and post-service. The findings are that Koirala manifests the nature and mind sets of a lahure who is on leave and returns to the cantonment; the self of the soldier is ‘other’ to show people, and he also displays his own provocative character. Rai discloses the temperament and perception of ex-lahure in his village; circumstantial evidences and his subconscious forces him to slander and calumniate the accidental act. Likewise, Bista demonstrates the motivation, rationale and intention of lahure and village boys who wish to join army forces; their paramount intention is to pay off debts and earn for bread and butter as well as social status in the village. Rai also exemplifies how the beloveds are psychologically devastated by the lost lahure in wars. They divulged the psychic conditions, individuals’ unique thoughts and experiences of Gurkha soldiers to the particular problems outside the cantonments and battlefields. This research significantly unveils thoughts, provocation, psyche and motives of lahures to the (academic) publics who have heard and described the braveness and honesty of the Gurkha soldiers in the battle fields. 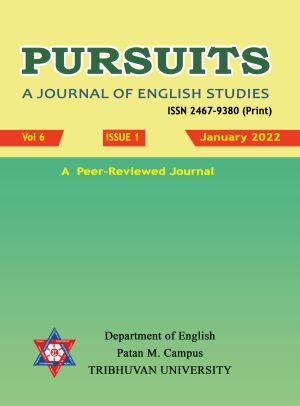