Methods: This is a prospective descriptive study from December 2012 to September 2016, in which a total of 44 patients with esophageal stricture having benign lesion, confirmed in histopathological examination, were included. Wire-guided through-the-scope EBD of esophageal stricture was performed with Controlled Radial Expansion Balloon to relieve the stricture and the procedure was repeated every two weeks until the symptoms of dysphagia was relieved. The patients were followed up on three months and six months for the assessment of recurrence of dysphagia.

Results: Among 44 patients of benign esophageal stricture [mean age 51.5 years (± 15.6; range 18 to 75 years), male 54.5%, female 45.5%], the frequency of different etiology was 54.5% peptic injury, 18.2% post-radiotherapy, 15.9% idiopathic, 6.8% corrosive ingestion and 4.5% eosinophilic esophagitis. A total of 75 sessions of dilations were performed for 44 patients who had various degrees of dysphagia prior to each session. Among them, increased number of sessions of EBD was needed for stricture caused by corrosive ingestion, post radiotherapy and eosinophilic esophagitis (p<0.001). The technical success rate for EBD was 100% and there was no any perforation or other complication during the procedure except for minor bleeding at the site of stricture dilation. After a session of one or more dilations, all patients could maintain a solid diet at 6 months of follow up.

Conclusions: Peptic stricture was the commonest cause of benign esophageal stricture followed by post-radiotherapy, idiopathic, corrosive ingestion and eosinophilic esophagitis in the western region of Nepal. The stricture caused by radiotherapy, corrosive ingestion and eosinophilic esophagitis required more sessions of EBD. When performed carefully by an experienced endoscopist, through-the-scope EBD is safe and effective in treating benign esophageal strictures. 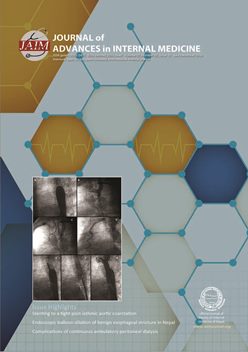 Shrestha, U. K. (2017). Etiological profile of benign esophageal stricture and its management with through-the-scope endoscopic balloon dilation in the western region of Nepal. Journal of Advances in Internal Medicine, 5(2), 29–33. https://doi.org/10.3126/jaim.v5i2.17350
Download Citation