Background and Aims: Upper gastrointestinal bleeding (UGIB) is one of the most common and grave emergencies encountered in Emergency department in Tertiary health care centre in our country. Upper endoscopy has a crucial role in the diagnosis and treatment of upper gastrointestinal bleeding. The aim of this study is to assess the endoscopic findings in patients presenting with first episode of UGIB.

Methods: This was a hospital based cross sectional study of patients with haematemesis, melena or both who underwent UGI endoscopy at Bir Hospital during January 2019 to January 2020. Patient demographics, site and nature of lesions and risk factors for bleeding were analyzed.

Results: Among 72 enrolled patients 48 (66.67 %) were male and 24 (33.3 %) were female. Haematemesis 27% was the most common presenting complain followed by melena 25.5% and fainting/ dizziness 22.5%. Endoscopy was done in all cases and gastric ulcer disease 27.8% was the commonest cause of first episode of UGI bleeding followed by variceal bleeding, gastric erosion and duodenal ulcer, 25%, 16.7%, 12.5% respectively. 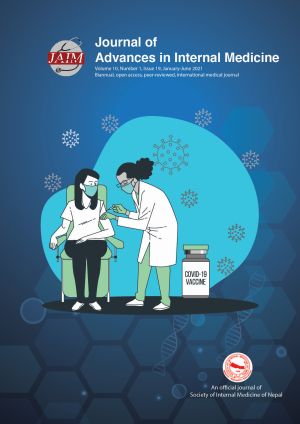