Application of csm- ceres-maize model for seasonal and multi-decadal predictions of maize yield in under subtropical condition of Chitwan, Nepal

The average maize yield of 2.5 t/ha in sub-tropical terai and inner terai of Nepal has been very less than its potential yield of about 5.0 t/ha, for which changing climatic scenarios have been reported the critical factors. Cropping system Model (CSM)-Crop Estimation through Resource and Environment Synthesis (CERES)-Maize, embedded under Decision Support System for Agro-technology Transfer (DSSAT) ver. 4.2 was evaluated from a datasets of field experimentation by growing four diverse maize genotypes viz. full season OPV (Rampur Composite), Quality Protein Maize (Posilo Makai-1), Hybrid (Gaurav) and Pop corn (Pool-12) under three different planting dates (September 1, October 1 and November 1) in 2009-10 at Rampur Campus, Chitwan. The experiment was laid out in two factor factorial randomized complete block design (RCBD) with three replications in slightly acidic (pH 6.7) sandy loam soil having low soil available N( 0.49%) and K (148 kg/ha) and medium P (16.3 kg/ha) status. The ancillary and yield data obtaining from field experiment was analyzed from the M-Stat C software and recorded that Gaurav hybrid produced significantly higher yield under September 1 planting (5.86 t/ha) followed by Posilo Makai 1 (5.55 t/ha), Rampur Composite (5.1t/ha) and the least with Pool-12 (3.45 t/ha). Further, the heat use efficiency of diverse maize genotypes were also calculated by using the mean temperature based accumulative heat unit system and found the stable yields only with Rampur Composite for all planting dates and the rest genotypes were suitable only to the early winter plantings. Model calibration was done by using September 1 planting date for all 4 maize genotypes while validation was accomplished by using the remaining treatments for predicting growth and yield of different maize genotypes. The year 2006- 07 was found 13, 18, 23 and 7% higher in producing the maize yield than the standard year 2009-10 for Rampur Composite, Posilo Makai-1, Gaurav and Pool-12, respectively. Further, the different climate change scenarios as advocated by IPCC (2007) for 2020, 2050 and 2080 from base line of 2009-10 was studied to simulate the growth and yield performance of diverse maize genotypes with September 1 planting date and found that there would be increment in winter maize yield up to 2020 scenario of climate change and the drastic yield loss would be on 2050 to 2080 scenarios under the present levels of agronomic management options and urged for the new climate change adaptation and mitigation production technologies. 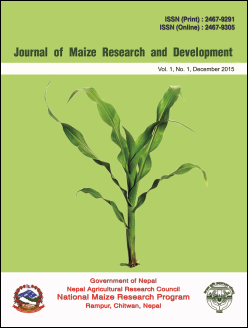