Cognitive Function in Children with Epilepsy

Introduction: Epilepsy is a worldwide and common child health problem. One of its complications is cognitive impairment that will impact on children’s cognitive development and quality of life. The objective of this study is to find out whether epilepsy affects cognitive function in children.

Material and Methods: This was a cross-sectional descriptive study using secondary data from medical records. We collected data from children with epilepsy from 2004 until 2014 that have been actively managed in the Growth and Development Clinic, Sardjito General Hospital, Yogyakarta, Indonesia. Cognitive function referred to low IQ score that was gained from patients’ data. We analyzed the data using Fischer’s exact and two-sample Kolmogorov-Smirnov test methods. 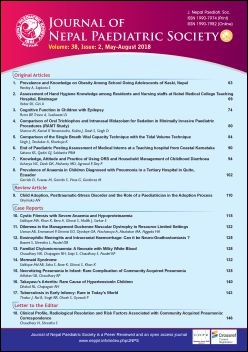