Pathology is a study of disease which deals with etiology, pathogenesis and morphological features and the associated clinical features. Pathology acts as a bridge that fills the gap between basic sciences and clinical medicine. With proper understanding of pathological processes, one can understand the disease process. In Nepal, since the beginning of medical school teaching, Pathology as a basic science discipline and is a component of the preclinical medical school curriculum.

Pathology teaching in 19th century was vague, disorganized and very little, though precious. The lectures used to be conducted by surgeons. At Barts, surgeon Sir James Paget had taught surgical pathology. The real revolution in pathology teaching began in the early 1900s when, spurred on by increasing understanding of disease mechanisms, pathology began to be accepted as a specialty in its own right.

During the early and mid of 20th century, pathology teaching was a part of clinical teaching with daily, autopsy demonstration. By the late 1980s, significant change had taken place. In many medical schools, debate started regarding relevance of vigorous preclinical teaching. Then system-based approach was incorporated and traditional preclinical course had been abandoned. With this pathology teaching also began to change with pathologists being involved in teaching histology, often alongside pathology to highlight its clinical relevance. In medical schools the pathology teaching time was cut. Autopsy demonstrations, which had been so popular with generations of medical students, were becoming irregular and less well attended.

Despite all these, Pathology is vital and will remain so, to the proper understanding the disease process. If various clinical subjects are the branches of medicine, pathology is the main stem of it. As Sir William Osler says “As is your Pathology, so is your Medicine.” His words are as true today as they were in his time. Pathology teaching may also include multidisciplinary team meeting as one of the key method of teaching. It not only actively involves Pathologists in teaching learning process, but also an important way of exposing interested students to pathology and, in the author’s experience, provides a strong stimulus for eventual choice of pathology as a career.1 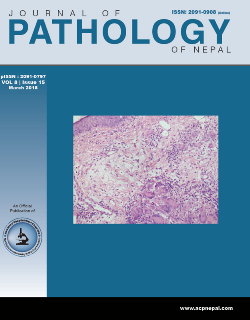