It has been four decades since the beginning of undergraduate medical education in Nepal and more than three decades of postgraduate medical education.1 Currently, Institute of Medicine of Tribhuwan University and Kathmandu University are major institutions providing medical education in Nepal with the help of their affiliated medical colleges. Two other deemed universities, B P Koirala Institute of Health Sciences and Patan Academy of Health Sciences also have major contributions in producing medical doctors in Nepal. National Academy of Medical Sciences (NAMS) provides postgraduate and super specialty training for doctors. Nepal Medical Council is the regulatory body that lays down the guidelines, provides accreditation and supervises to ensure that the regulations are being followed.2 It also conducts licensing examination for medical doctors.

Educationalists worldwide vary in their opinions on the aim of education3-8 but Salomon precisely includes almost all of them as “The aim (of education) is to equip the learner with portable chunks of knowledge, skill, and understandings that can serve in other contexts.”9 Adkoli has analyzed migration of health workers in south Asia 10 and found that there was no systematically collected data regarding the extent of migration of healthcare workers and its possible impact on health care in Nepal. Nepal government spends a significant chunk of its financial resources to train doctors but many students who avail this benefit of ‘scholarship’ take part in the migration described in the article. Ironically, many doctors who are currently serving their motherland were either trained overseas or the ones who did study within Nepal but without availing any support from the government. When the first medical school was established in Nepal, the idea was to develop doctors who can prevent, diagnose and treat medical ailments prevalent in Nepal (Community based curriculum) and the career planning was designed in such a way that doctors were inevitably retained in Nepal.  The philosophy of this system was contrary to the definition laid down by Salomon9 but it did benefit the society and the country in the long run11. Things changed gradually over time and currently the doctors produced by oldest and state funded medical colleges of Nepal are ideal for health job markets of first world countries. This suitability coupled with adverse socieo-economic and political factors of our country has led most students who become doctors by state funding opting to serve in first world countries like United States, United Kingdom, Australia and Canada.

Brain drain in Health sector is a global phenomenon12, 13, but developing countries like Nepal receive maximum brunt.  Lately, Nepalese medical education sector has been receiving a fair share of attention from all including media. However, it is saddening that this issue of ‘brain drain’ is something that had not gained any attention. Coming back to Adkoli’s work, we don't even have a data on how many doctors we are losing every year?10 There have been certain restrictions and bondages but these sorts of legislations have been seen to work contrarily. What is found to be lacking is the sense of belonging and development of the feeling that ‘I am important to this society and I must work for its betterment’. Most young doctors have a feeling that ‘there is no one taking me seriously anyway and it doesn't really matter weather I stay or Leave’.

It is high time policy makers ensure that the medical doctors that we produce from the common men’s hard earned money serve the country. In addition to the legislations in the form of bondage, we should be able to install the feeling of belonging and sense of importance in the hearts and minds of these young doctors. To begin with, it would be a good idea if we start maintaining the database of the medical graduates that were and will be produced from Nepalese medical colleges; taking examples from many colleges from other countries that are doing it currently.14-16 Zimmerman’s study cited earlier provides an interesting insight that medical students with pre-medical education as paramedics were twice as likely to be working in Nepal and 3.5 times as likely to be in rural Nepal, compared with students with a college science background.11 We can also include into the undergraduate medical curriculum the concepts of social ethics, moral values, social justice and the long-term benefits of serving the society and the country that has invested so much for their education. 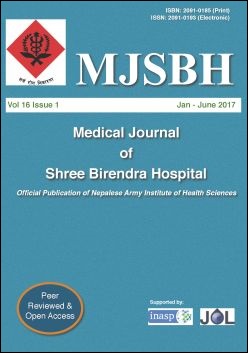