Review of Perinatal Deaths in a Tertiary Care Hospital of Nepal

Aims: Perinatal mortality is a public health problem especially in developing countries like Nepal. This study is an attempt to assert the perinatal mortality status for the year 2016/2017 A.D. of Shree Birendra Hospital, a tertiary hospital. This study becomes imperative to comprehend the various shortcomings in the maternal and child health care, so as to remedy them effectively.

Methods: This is a hospital record-based study conducted at Shree Birendra Hospital, Kathmandu, a tertiary care facility of the Nepal Army. The record of all perinatal death from 13th April 2016 to 12th April 2017 was reviewed.

Results: Out of 1051 total births, there were 12 perinatal deaths with perinatal mortality rate of 11.42 per thousand births. Perinatal death was more prevalent in the age group 20-25 (58.33%), multiparous female (60%), period of gestation between 35-40 weeks (58.34%), male gender of baby (66.67%) but equal number of deaths was seen in both vaginal delivery and emergency LSCS. According to the Wigglesworth pathophysiological classification to classify perinatal deaths, conditions specific to neonate (33.3%) constituted as a significant cause perinatal death followed by stillbirths or neonatal deaths with congenital anomalies (25%) and conditions associated with prematurity (25%). 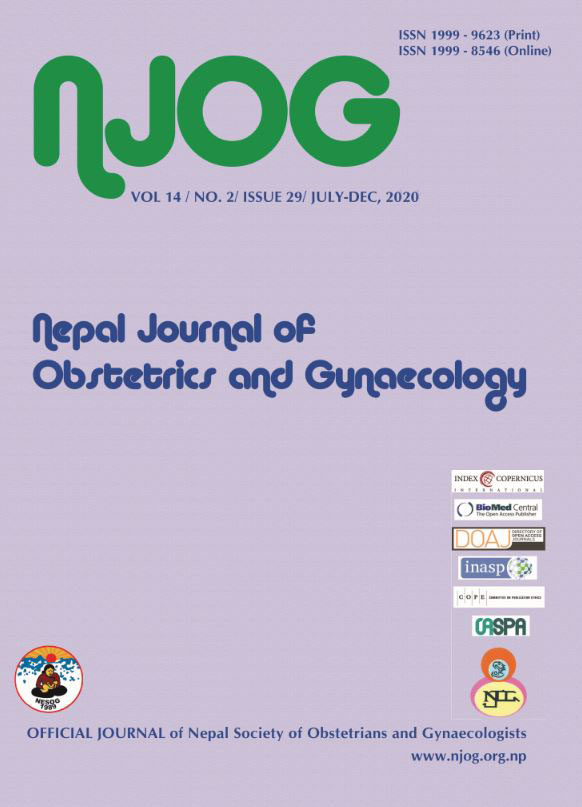 Copyright on any research article in the Nepal Journal of Obstetrics and Gynaecology is retained by the author(s).

The authors grant the Nepal Journal of Obstetrics and Gynaecology a license to publish the article and identify itself as the original publisher.

Articles in the Nepal Journal of Obstetrics and Gynaecology are Open Access articles published under the Creative Commons CC BY-NC License (https://creativecommons.org/licenses/by-nc/4.0/)

This license permits use, distribution and reproduction in any medium, provided the original work is properly cited, and it is not used for commercial purposes.