The nesting ecology, interspecific interaction and nesting association of the Black Ibis (Pseudibis papillosa) were studied during the 2003-2006 breeding season in 400 km2 area in and around Churu city of Rajasthan, India. Total 28 nest sites of the Black ibis were located within the study area. Majority of the nest sites were located in the heart of rural and urban area and nearby feeding sites but in rainy season the Black ibis prefers to nest in outskirt of rural and urban area. Among 28 nest sites 14 (50%) nest sites were permanent in nature while 14 (50%) were temporary in nature. Among permanent 14 nest sites, 7 (50%) were found in rural area and 7 (50%) in urban area. The similar ratio was found for temporary nesting sites. The Black ibis more frequently preferred nest on tallest available tree with highest relative density, canopy cover and DBH at nest site. The average nest tree height was 8.19±SD1.39 m above ground. The nesting tree height was found to vary from 4.81 to 13.00 m. The nest position from the ground was at an average of 6.88±SD1.19 m. The nest height varied in the range of 3.84 to 11.02 m. The average canopy cover was 5.67±SD1.11 m. The canopy cover was in the range of 3.09 to 9.73 m. Average data on DBH was also observed with an average of 0.63±SD0.18 m. The DBH noted to vary in the range of 0.43 to 1.16 m. Trees selected to nest showed significant correlation between the height and canopy cover (0.872243, p=5%), and total heights of the trees and the nest heights (0.932416, p=1%). Characteristics such as tree height, canopy cover, and nest height of the trees used for nesting once or many times were observed. All observed nests of the ibis were found to locate on the third sub-branch of the trees. Nest placement on the sub-branch of the tree was found with an average of 2.85±SD 0.32 m from the end of the trunk. The numbers of flight pathways at each nest site were also counted and it was found with an average of 2.71±SD 0.7 and it varied in the range of 1 to 4. The Black Ibis nests singly, usually high in a tree such as a peepal or neem, nearly always occupying an old nest of a bird of prey, a vulture or a crow or a kite. Often the tree is very close to human habitation. Nests are often used annually in spite of nest failures due to harassment by House and Jungle Crows. 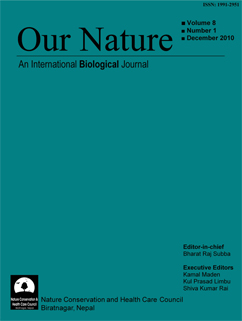