The growth, production and survival of Nile tilapia Oreochromis niloticus, with an average individual weight of 0.2 g were used to determine the density-dependent growth and production relative to phytoplankton and periphyton biomass in periphyton-based aquaculture. The trial was conducted in 10 m2 concrete tanks for a 56 day period. A 10 cm layer of soil was placed at the bottom of each tank. To act as substrates for periphyton, bamboo poles with an approximate submerged surface area of 50% to that of the total tank surface area were vertically posted in the tank bottom. A weekly fertilizer dose of urea and triple superphosphate at a rate of 28 kg N and 7 kg P/ha/week was added. Four stocking densities in triplicate were used: 5, 10, 20, and 40 fish/m2 (50, 100, 200, and 400 fish/tank). The results indicated that the carrying capacity of periphyton-based tanks for Nile tilapia was 293 g/m2 in a 56-day culture period. The relationships between gross yields of tilapia (y) and periphyton dry matter (x), or chlorophyll a (x) were described as y = 353.2483-109.1809x, R2 = 0.5646, P = 0.005, y = 125.5916 + 0.9698x, R2 = 0.5841, P = 0.004. Provision of substrates at 50% of total tank surface area was sufficient for periphyton production in nutrient-rich aquaculture ponds where grazing rate and fish density in the system are balanced. 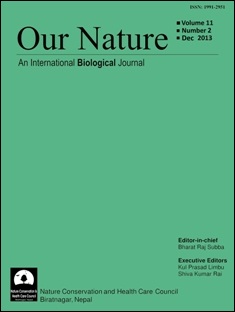