Nepal’s economy is largely based on agriculture, predominantly small-scale farming, and about half of which is dependent on natural rainfall. In Nepal, agriculture is a highly climate sensitive sector. Historically, the sector has been affected by floods, droughts and erratic rainfall. This study focused on the impacts and economic costs of climate change in agriculture and assessed perceptions of communities of Kaski and Mustang districts on frequency and intensity of hailstorm events over time including their related impacts. Scenario-based impact assessment was used for assessment of long-term impacts and economic costs of climate change. The study used Decision Support System for Agro-technology Transfer (DSSAT) model to analyze the effects of climate on three major crops, namely rice, maize and wheat. The economic loss due to the impacts of climate change in cereals (rice, maize and wheat) was estimated at around US$ 336.42 million in the year 2006. Among the respondents, 60% reported food shortages which made them highly vulnerable due to climate variability. Similarly, 80% of the respondents mentioned that 20 major hailstorm events have occurred in the vicinity of their communities over the last 35 years (up to 2012) and have caused significant damage to crop production, livestock and infrastructure. DesInventar database reported damage of 75% to 100% of the key crops. Crop yield projections indicate a complex mix of increases and decreases in yield which vary over time (in projections in 2030 AD and 2070 AD) and by location (east to west/Terai to Mountains). In the 2030s, there is a net increase in production and values; however, by the 2070s, the impact in agricultural production is expected to reach to US$ 140 million/year (2014). In terms of research, there are priorities around further work to understand climate uncertainty, the indirect economic costs of these impacts, and early research priorities to address long-term challenges. There is an urgent need to build capacity, with information and awareness raising, monitoring, research, and institutional strengthening. 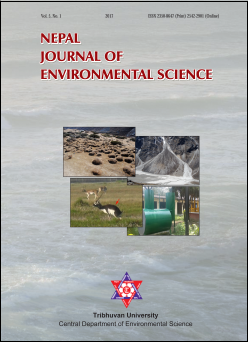