A study was carried out using three maize genotypes with three levels of nitrogen (30 kg, 60 kg and 120 kg per hectare) during the summer season of 2010 and 2011with the aim of predicting maize (Zea mays L.) yield through the Normalized difference vegetation index (NDVI). The NDVI was recorded at different times throughout the growing season using a Greenseeker™ handheld sensor. Significant effect of genotypes and nutrient levels on the NDVI was observed at different growth stages of maize. There was positive correlation between the NDVI and grain yield. In the first season, the correlation coefficients were 0.90, 0.92, 0.76 and 0.73, respectively at 15, 45, 75 and 110 days after seeding. In the second season, the correlation coefficients were 0.80, 0.92, 0.77 and 0.75 respectively at 15, 45, 75 and 110 days after seeding. The NDVI based N calculator showed that irrespective of genotypes, yield potentials under farmers' levels of nutrient management were almost half of the recommended doses of nitrogen. The amount of N to be top dressed decreased with increased crop duration. Grain yield varied significantly due to season, genotypes and nutrient levels. NDVI was affected due to season, stages of the crop (DAS), genotypes and nutrient levels. Interaction effects were significant for season x genotype, growth stage x genotype, growth stage x nutrient levels, genotype x nutrient levels and genotype x growth stage x nutrient levels. There was a strong positive correlation between NDVI and grain yields of hybrid maize at 15 and 45 DAS, but this correlation declined thereafter. This means that N top-dressed at or after 75 days of seed sowing will not increase grain yield as significantly as N applied earlier in the season. In contrast, topdressed N was producing significant effects on the open pollinated Rampur Composite even after 75 days of seed sowing. Further confirmation of the finding could be useful for top dressing N in the maize crop. 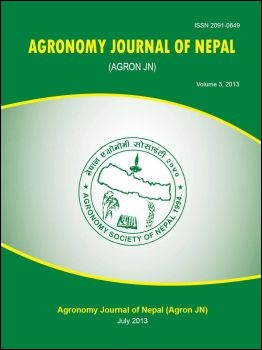