Representations of Death in a Changing World: An Anthropological Perusal of Death Rites of Gurungs in Nepal

People have developed ceremonies and rituals to help make sense or celebrate an alteration in position, circumstance or relationship. However, over time some have become diluted or rejected for whom they are intended. In majority of cultures, the greatest effort is given to the death rite of passage– and yet paradoxically it is the one that is now most often distorted or lost. This study attempted to describe the multiple aspects of changes that are occurring in Gurung death rite. Gurungs are followers of ‘Bonism’ but they are under the profound influence of Tibetan Mahayani Lamaism. Gurung community is changing from Mechanical to Organic Solidarity in which the Mechanical Unity of their traditional culture is transforming to loosely united Organic Solidarity of body. Gurung death rites have been influenced by many rudiments--migration, urbanization and modernization due to which there has been the emergence of deformed usages and behaviors in death rite. Urbanization impact on death rite is closely linked to modernization and the sociological process of rationalization, a speedy and historic transformation of Gurung social roots whereby predominantly rural Gurung culture is being rapidly modified by urban ostentatious culture. However, there is very vital element of unity, cooperation, sympathy and we feeling among the Gurungs owing to death rite that has tied all Gurungs under a shared and endorsed bond. It has created a reciprocal relationship between the living and dead-- both depending upon each other. Death rituals have been a means of co-ordination creating solidarity through ‘Syaisyai’ which is a social institution for uniting the Gurungs. This bond between giver and gift, the act of giving creates a social bond in Gurung community with an obligation to reciprocate on part of the recipient.

Prakash Upadhyay, Prithvi Narayan Campus, Pokhara, Tribhuvan University, Nepal
Upadhyay, Prakash is an Associate Professor of Anthropology at Prithvi Narayan Campus, Pokhara, Tribhuvan University, Nepal. He has been teaching and conducting research since eighteen years. He holds a Ph. D. in Anthropology, from Tribhuvan University. He is also trained in Aarhus University of Denmark as a research fellow and completed research on "The Squatters of Nepal". He has multi-disciplinary orientation by receiving Master’s Degrees in different disciplines of humanities and social sciences. He has published numerous research articles and published several books on anthropology including Social Ethnography of Hill Muslims of Nepal published by Adroit Publishers New Delhi, India, Research Methods in Sociology and Anthropology, Khitiz Publications, Kirtipur, Kathmandu, Using the Theoretical Lenses of Anthropology in Qualitative Researches, Arun publishers, Pokhara. His research interest area includes natural resources management, development, and cultural change. 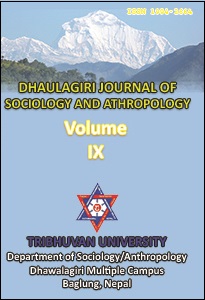