Leaderships in the Global South: On BP Koirala's Economic Thinking

Political leaderships in the global south emerged in course of anti-colonial movements or movements against domestic authoritarianism. The leaderships in these liberation movements also laid foundation for social and economic development of the respective countries, besides political transformation. This article analyzes economic thinking of BP Koirala of Nepal, who led the land-locked country to transform from Rana oligarchy to political democracy. Information by interviews and narrative analysis show that BP's economic perspectives were in germinal form, though he discussed on varieties of issues such as industrialization, land reform, tax, foreign aid, technology and planning. BP's concept on these economic issues represent desire and aspirations of a land-locked underdeveloped country Nepal in the fifties, which was about to relieve it from Rana oligarchy and embark into socio-economic modernization. His ideas were contextual that refer to his ideals of democracy and socialism and his affiliation with foreign leaderships and institutions. Besides the pursuit of economic development, BP's views on economy represent his political strategies to counteract feudal social and political order, seek his leadership's legitimacy, and build a broader coalition for political objectives. Nevertheless, BP's economic views seem to be people centric and hence tend to influence governments as prescription policies. 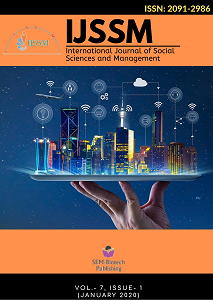