South Asia which is the southern region of Asia bordering with China, Central Asia, and West Asia. South Asia comprises Afghanistan, Bangladesh, Bhutan, India, Maldives, Nepal, Pakistan, and Sri Lanka. Geographically, it is dominated by the Indian Plate and defined extensively by the Indian Ocean on the southern region, and the Himalayas' hills and the Karakoram mountains on the northern part. On the other hand, China is a country in East Asia, which is the world's most populous country, with a huge population size of around 1.4 billion, according to the survey of 2019. Both the regions have been maintaining friendly relations for several decades since the birth of South Asian countries and the Chinese revolution in 1949. Currently, China is a rapidly growing economy which has been turned into the biggest economy of the World, taking into account of its GDP based on purchasing power parity (PPP). Thus, many scholars think that the Chinese economic involvement in the South Asian countries can create huge opportunities for both regions. The current trade imbalance between China and South Asia needs to be readdressed to ensure a win-win situation for both regions in the context of economic relations. At the end of this article, some policy recommendations have been provided to reduce the political tension between India and China and India and Pakistan. Finally we have recommended some policies to increase economic activities in the region and to speed up the sustainable development. 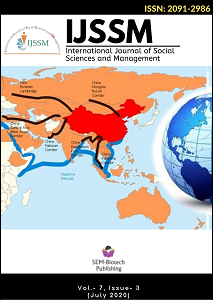