A Study on The Awareness of Benefits, Perceptions of Borrowers to Problems in Finance, and Utilisation of Microfinance

The study entitled “A study on the awareness of benefits, perceptions of borrowers to problems in finance and Utilisation of Microfinance” was centred in the first cent percent literate district of the nation but confined to the rural areas. The methodology adopted was by using a pretested structured questionnaire and eliciting the response. The results revealed that the awareness with regard to poverty reduction, factors on access and terms of conditions were as high as 98 percent, whereas that on awareness favouring utilisation and updation of knowledge was cent percent. The eight factors in perception included 3 with regard to aspects of financial support, three with regard to preconditions and two regarding compliances to awareness on the first three aspect of perception. 96 to 100 percent agreed to both adequacy and timely release, in case of the second, cent percent agreed that it was properly veted and there were neither conditions or strings attached, in case of compliance it was more than 95 percent. 94 percent of the borrowers used the money for the purpose whereas six percent deviated from the actual purpose. Mixed response was observed with regard to the utilisation however, the study revealed that it generated good amount useful for education, household expenditure, wealth creation and social security. Correlation studies revealed that age, education, occupation levels are all positively correlated with all five factors of awareness but not significant. However, in case of both awareness and perception there was a significant positive correlation between the factors taken up in the study. 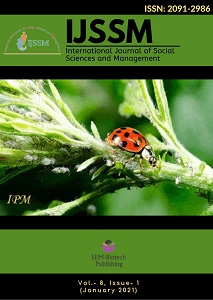