Helminthosporium leaf blight, a complex of spot blotch caused by Bipolaris  sorokiniana and tan spot caused by Pyrenophora tritici-repentis, is one of   the most important foliar diseases of wheat in Nepal. It appears in almost all wheat growing areas and causes severe yield loss every year. A study was   conducted at Regional Agriculture Research Station (RARS), Tarahara, Sunsari during 2004-05 and 2005-06 wheat growing seasons to elucidate role of nitrogen in wheat genotypes for management of the disease. Field experiment was laid out on split plot design with three replications. Four doses of nitrogen in six different promising genotypes were tested. Nitrogen   levels higher than 50 kg ha-1 significantly reduced disease severity and increased grain yield in all genotypes but there was no significant differences in grain yield in the first year. In the second year, grain yield difference   among the genotypes was significant. Area under disease progress curve(AUDPC) was not significant between two doses 100 and 150 kg ha-1. The wheat genotypes showed different reactions to disease. Genotype BL 2047   had the lowest incidence of disease followed by BL 1887, whereas BL 2217 had the highest incidence of the disease. Genotype BL 2196 produced the highest grain yield (2172 kg ha-1) and the lowest grain yield was obtained in Bhrikuti followed by BL 2089. These results suggested that fertilizer should be applied in soil at balanced dose 100:50:50 N:P2O5:K2O kg ha-1. Growing relatively resistant genotypes with the balance dose of fertilizers can reduce foliar blight severity in wheat. 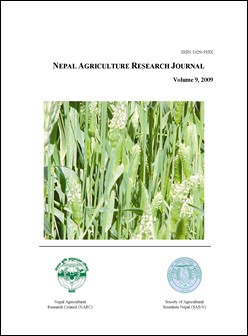