Usage of Man-Made Underpass by Wildlife: A Case Study of Narayanghat-Muglin Road Section

Natural areas are increasingly fragmented and degraded globally due to increasing anthropogenic pressure. Linear infrastructures such as roads, railways, canals, and transmission lines are major causes for such fragmentation resulting in population isolation, habitat connectivity loss, and gene pool shrinkage. Various mitigation measures are adopted to minimize such effects. The first such mitigation measure (an underpass) has been constructed along the Narayanghat – Ramnagar, and Ramnagar – Jugedi section of the Narayanghat-Muglinroad (section connecting two national highways; Prithvi and Mahendra highway). The effectiveness of these underpasses was assessed using a camera trap picture of wildlife movement during March and April 2019. Key informant interviews (n=14) were also carried out to understand the abundance of recorded species in the local forest. With 37 trap nights of sampling effort, seven mammalian species were recorded and among them, wild boar was found with the highest independent images (35). A total of 31 independent images (70.4 %) captured during the night hours showed that manmade underpasses were used more during the night. Confirmation of usages of these underpasses supports the study to indicate the necessities of underpasses while constructing roads that pass and traverse the wildlife habitat. 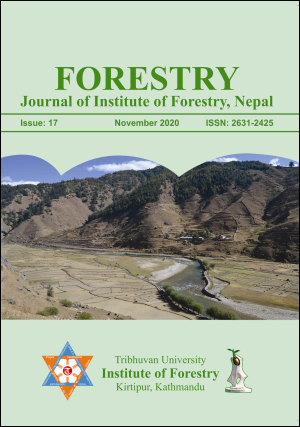