This paper analyzes the tools of discourse in Vaclav Havel’s play: Temptation. Based on exploration of modal verbs and metaphors, I argue that metaphors and modal verbs assume their roles to represent the definite ideological stances. Not surprisingly, the metaphor draws parallel between concepts and displays the user's horizons, the modal verbs, specifically the use of deontic modality (obligation and necessity) shape the specific positions of the speakers. Centrally, these tools serve the purposes of exposing the inequality and spell out the domination. The glosses of examples from Temptation, particularly, the choices of modal auxiliaries subsume the attitude/meaning and/or confidence in the proposition the discourse participant. Similarly, the metaphors chosen by the discourse participants signal their location of the viewpoint. The method used for the study is the collection of the metaphors and modal resources, categorization of them for finding the analyzable patterns in them. The methodological thread is, obviously, Critical Discourse Analysis (CDA) that exposes the inequality and promotes resistance with the mandatory modesty. Through the study, the suggestive conclusion has been drawn that the play deploys the modal verbs- ought to and must, and also the metaphors- comedy, virus, brochures, hand, solitary soldier, two birds with a stone, unfortunate seed and Bluebird for the enactment of domination and resistance to it 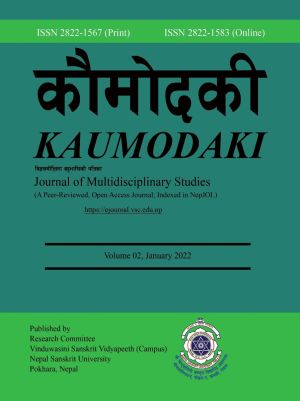