Debate of Ethnic Identity in Nepali Politics: An Examination of the debate from the Kisan Community of Eastern Nepal

The Kisan is an ethnic group of Nepal lived in Jhapa district only. It is a Tarai origin group with 773 populations which is traditionally organized under its own political organization, the Mahato system. The Mahato is a hereditary community head which is supported by Wokil (minister) and Sipahi (Police). These traditional authorities run a well functional community court which maintains peace and harmony in the community and works for the preservation of cultural practices. Along with the establishment of multiparty democracy, the community is exposed to external situations: political parties and economic organizations, advocacy groups, donor agencies and so on. A few literate Kisans seeking employment opportunities interfaced with the advocates of National Federations of Indigenous Nationalities and Action Aid Nepal after multiparty democracy. As a result, they had motivated and established a non-governmental organization for ethnic welfare. After establishment of the Kisan Community Development Academy (club in the Kisan language), the community is formally divided into two groups: the illiterate Kisans involved in community court under their traditional authorities and the literate Kisans involved in the newly established club. The club ran literacy and sanitation programs and constructed toilets and water taps. Mainly, it was involved in socio-cultural change and identity politics by the support of the above mentioned organizations. On the contrary, the traditional authorities involve in the preservation of community culture and maintain peace and harmony. The literate Kisans involved in identity politics are motivated for salaried jobs, not for cultural preservation for Kisan identity. 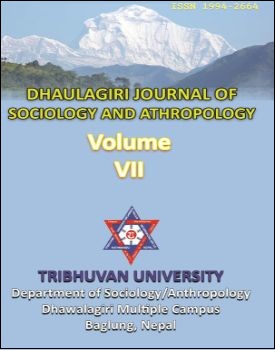