Microcystins (MCs) are toxic cyclic heptapeptides produced by few toxic cyanobacteria and generally form blooms in eutrophic surface fresh water bodies. They cause acute to chronic poisoning and other health related problems mainly by irreversible inhibition of protein phosphatases (PP1 and PP2A) and increased formation of reactive oxygen species (ROS).  Due to limitation of non-biological methods of water treatments the exploration of MCs degrading bacteria is emerging at a quite pace to address, through bioremediation, the problems posed by MCs in water and water-bodies. Report and study of MCs biodegrading bacteria from India were lacking. However it was evident, from our previous study, that microcystin degradation can be achieved by indigenous microcystin degrading bacterial population in its natural place where microcystin producing blooms occur. This study has presented isolation and characterization of indigenous microcystin degrading bacteria from holy ponds in Utter Pradesh of India. Overall 20 bacterial isolates were isolated from Microcystis infested different ponds. Out of these 13 isolates were mlrA positive by PCR and were found to be distinct isolates by amplified ribosomal DNA restriction analysis (ARDRA). However, ARDRA analysis revealed overall four bacterial groups. On the basis of 16S-rRNA gene sequence the Gram-positive-rod isolate PM1 was identified, with 99% identity, as Bacillus licheniformis which was shown earlier to cluster with microcystin degrading bacterium B. subtilis. Thus the present study revealed, for the first time, probable microcystin degrading bacteria in water-bodies from India. The potential and the metabolic pathway of PM1 and other mlrA positive isolates need to be further studied and validated to confirm their application in microcystin bioremediation. 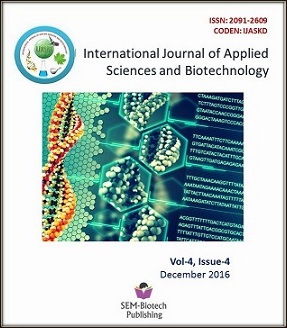