Even though rice is a major crop of Nepal, its’ productivity seems very low in South Asia due to high infestation of weeds. Therefore, a field research was conducted in the field of Lamjung Campus, Sundarbazar from July-October, 2015. Two Factorial Randomized Complete Block Design under direct seeding (DSR) and transplanted (TPR) cultivations with weeded and non-weeded check for diverse rice cultivars (US-382, Sukha-2, NR-10676, NR-10490 and Khumal-10) as treatments was executed in field with 3 replications. Statistical results indicated that Rotataindica, Fimbristylis miliacea, Ageratum conyzoides, Cyperusiria, Polygonum barbatum and Cynadon dactylon were found as the major weeds under both DSR and TPR whereas Paspalum distichum L., Alternanthera sessiles L., Echinochloa colona L., Digitariasp., Amischophacelus axillaris L., Echinochloa crusgalli L. were minor. Rotataindica was found the major weed in TPR. It was seemed that the highest weed population recorded for US-382(131.7/m2),when cultivated under TPR system but it was completely absent under DSR. Meanwhile Cynadon dactylon was completely absent in weeded region of TPR system, which in contrary was the highest in weeded field of DSR with variety US-382(18.7/m2). Similar results were found in case of biomass for varieties consisting higher number of weeds while it was lowest in weeded field of NR-10490 shown as TPR. Highest grain yield was obtain from the weeded region of US-382(7.7 t/ha) of TPR system whereas lowest yield was found in varieties NR-10490 and NR-10676 (1.8 t/ha) of non-weeded region of DSR system. With the increase in biomass of weed the yield of rice decrease gradually with co-relation, y = -0.0119x + (R² = 0.1251). Hence, without effective weed control management we can’t increase the productivity of rice. 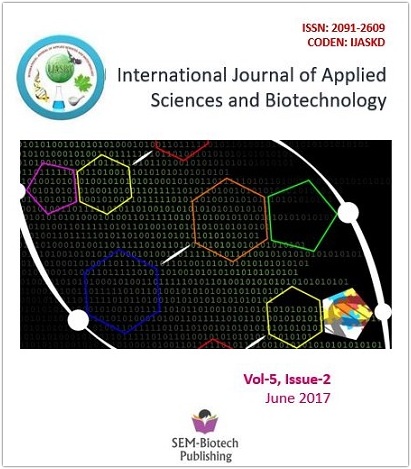