The study was conducted to determine the resource use efficiency, profitability and demography of maize farming in Sindhuli district. This study was conducted in 120 maize producers, 60 from Kamalamai Municipality (KMC) and 60 from Marin rural municipality. Pretested semi-structured questionnaire was administered to randomly selected farmers. Maize producers were interviewed using face to face interview method in the month of October 2018. All the data were entered into SPSS and Microsoft excel and analysis was done by using Microsoft excel and SPSS. Cobb- Douglas production function was used to determine the resource use efficiency of maize production. Benefit cost ratio in the research area is 1.20 which indicates that maize production was profitable and farmers of Sindhuli get additional 20 paisa with investment of one rupee in maize farming. Productivity, cost and income per hectare of maize farming in Sindhuli was 1.98 tons, Rs 42423.3 and Rs 50805 respectively. 10% increase in chemical fertilizer, FYM and seed cost resulted in increase in income by 7.21%, 2.43% and 0.6% respectively. 10% increase in labor and animal power resulted into 0.2% and 0.07% decrease in output. For optimal allocation of resource expenditure on seed and chemical fertilizer were need to be increased by 89.93% each. Labor, animal power and FYM were over utilized resources for maize farming. The sum of coefficients was 0.983 which implied decreasing return to scale, 100% increase in all the factor of production included in the model would result in 98.30% increase in maize production. 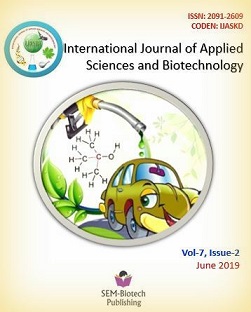