Caste has been a form of social stratification characterized by endogamy, hereditary transmission of a lifestyle, which often includes an occupation, ritual status in a hierarchy and customary social interaction and exclusion based on cultural notions of purity and pollution. Hierarchy, commensality, repulsion and hereditary membership and specialization are the major characteristics of caste system. It is assumed that castes arose from differences in family ritual practices, racial distinctions, and occupational differentiation and specialization but it is socio-political institution mainly characterized by domination and subjugation. APA model has been applied to this research work. The theory of origin of caste and its orientation has been of great use in preparing the article. The readers will be aware of the implicit intention of the writer that the caste system that pervades the South Asian region is not the product of religio-cultural institution nor it has any relation with the Brahminical scripture like the Vedas but it has socio-political orientation. 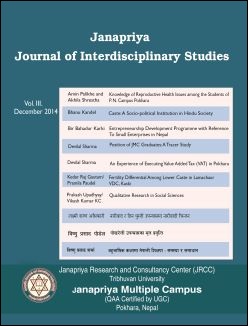