In Nepal, non-timber forest products (NTFPs) have high potentiality in contributing to local and national economy. Studies have shown that the potentiality of NTFPs has not been realized yet. This paper aims to explore the number of NTFPs species and quantity collected against the number of NTFPs species and quantity specified in the five year forest management plans of three districts (Baglung, Parbat and Myagdi) in Dhaulagiri region. The data related to number of NTFPs species and the quantity collected in fiscal year 2016/2017 were acquired from three District Forest Offices (Baglung, Parbat and Myagdi) and compared them as specified in the five year forest management plans. The NTFPs species specified for collection in the plans were 90 in Baglung, 50 in Myagdi and 13 in Parbat district. Only 21 species from Baglung, 16 species from Myagdi and none species from Parbat were collected in fiscal year 2016/2017. The annual total quantity of the NTFPs specified in the plans of three districts was 454.21 tons with the royalty of US$ 78,500. But the harvested quantity of NTFPs was only 31.18 tons with the royalty of US$ 4,610 in fiscal year 2016/2017. The quantity of harvested NTFPs was 9.59% and 3.64% of their supply potential in Baglung and Myagdi districts, respectively, while there was no collection of NTFPs from Parbat district. On an average, only 6.87% of NTFPs specified in the plans were collected, generating only 5.87% of the total royalty specified in the plans. The study revealed that remoteness of the area, lower quantity of NTFPs for commercial harvesting and lack of site specific plan of NTFPs are the major causes for under harvesting. Networking of local people and NTFPs traders and formulating site and species specific NTFPs conservation, management and utilization plan are necessary to collect NTFPs in a sustainable manner from these districts. 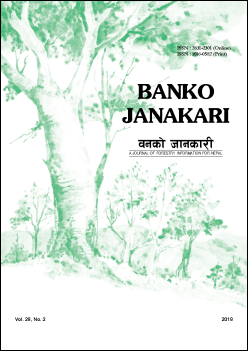