This study was carried out to find out the effectiveness of role play technique in improving speaking skill in English. The population of the study was the grade X students of a public school from Lamjung district. The experimental group was taught through role play while the control class was taught through the traditional grammar based techniques. The total population of this study was 40 students who were enrolled in the academic year 2018/2019. The study was experimental approach. The tools applied in this research were observation sheet and speaking test. After 20 lessons of the teaching, the post-test of speaking was conducted in which the students in both groups were asked to answer. The results showed that there is a significant improvement in speaking skill of experimental group. It can be concluded that role play have significant effect on students’ speaking skill.

Binod Neupane works at Marsyangdi Multiple Campus, Besishahar Lamjung/ English Language Department and Janabikas Secondary School, Lamjung. He earned M.Ed. in English in 2003 and M.A. in Sociology in 2007 from Tribhuvan University. He works as the head of English in both institutions. He is also the chair of NELTA Lamjung, life member of NELTA and member of IATEFL. He has been teaching English Language Teaching, Foundations of Language and Linguistics, and Research Methodology in English Education since a decade. His field of interest is Applied Linguistic and Research Methodology. Mr. Neupane is now an ELT trainer of DEO Lamjung and NELTA Lamjung. 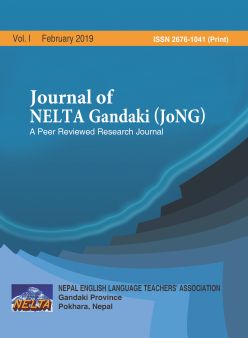 The articles, once published in this journal, must not be reused/ republished without taking written permission of the copyright holder.